Cash versus Stocks - How to build wealth

Cash versus Stocks - How to build wealth

Cash is king. At least for many of the savers with their thick cash cushion that seems to be the predominant mantra. While having a nice stack in your savings account was certainly a decent way to grow your wealth over a decade ago, this no longer holds true.

The trend of low returns isn't exclusive to savings accounts. Bonds, a once viable alternative to savings accounts and stocks offering higher returns to the former and more predictable and stable returns to the latter, have seen a similar fate. Both investment vehicles not only saw their returns diminish, but investors even endure negative returns with money aplenty and central banks pumping even increasing amounts of cash into the global financial markets.

It is thus no surprise that many are less than satisfied with the returns from their savings according to a variety of surveys. 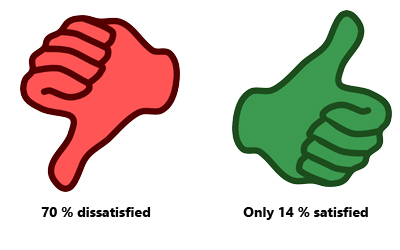 There is another important reason for why so many are unhappy about their saving and investment returns: keeping money in cash saving accounts. We have just mentioned Japan and Germany above. These are also two of the countries with the highest savings rates per person in the world. Germans, for instance, started 2020 with a 16 % savings rate and ended it with an astonishing 20.1 %. Of course, the pandemic had a significant impact with opportunities to spend rather scarce. The story is the same across the world. Why would a high savings rate translate to high levels of dissatisfaction with the returns from investments? As we all have had to accept over recent years, there simply is no money to be made leaving your hard-earned money in cash saving accounts. 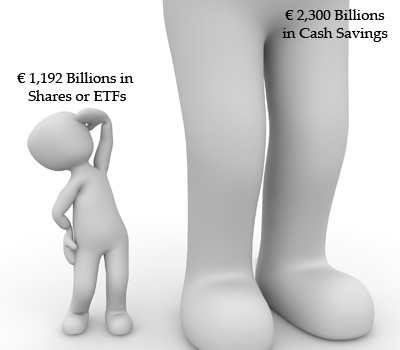 Let's take a trip through recent history. While 10,000 Euro or Dollars would have earned a healthy 460 Euro or Dollars per year in 2007 (with average interest rates of 4.6 %), the same amount would have maybe one Euro or two, frequently even earned nothing in 2020. In fact, in 2008 I had the pleasure of earning 8 % in my savings account with Citibank before the global financial market came to a screeching halt. If you are interested in the enormous difference a few percentage point in interest earnings make over the years, check out the article on compound interest.

If you add in inflation, your hard-earned cash will in fact lose money. In fact, those 10,000 Euros or Dollars would have turned into 8,626 Euros/Dollars after five years. That is a loss of 13.47 %. Most certainly not what any saver is after. 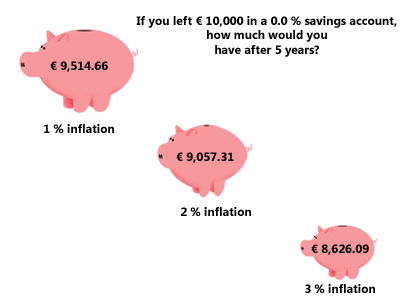 The picture is very different for shares. On average stocks, over the last 118 years, returned 6.6 % net - that is after inflation - on an annual basis. Bonds and savings, on the contrary, considering the same 188 year-time frame between 1899 and 2017, only returned 2.2 % and 0.6 % respectively after inflation.

Undoubtedly, different from cash savings, the swings in the stock market can be flabbergasting. Just consider 2020, the year of the worst pandemic since the Spanish flu. Beginning in March, after the coronavirus tightened its iron grip around the globe with lockdowns no longer the exception but the norm in more and more countries from Europe to Asia, the Americas to the Middle East, global stock markets plummeted. Just a few months later, stock markets bounced back. Not only slightly, many markets reached historic highs. The Dow Jones broke through the 30,000 mark, the Dax climbed to more than 13,000. A few outliers, such as the FTSE are lagging their peers, but for the most part, stocks recovered their losses.

Panic buying and selling are part of the psychological nature investors have to endure and some fall victim to. A quick look at the last 38 years, however, highlights the resistance of stocks. 30 out of the last 38 years closed in the black. Only 8 years closed in the red. These steady annual returns are in the light of an average drop of 15.3 % per annum. Just as this year, the year of the coronavirus pandemic, 79 % of the time markets recovered their double-digit losses and produced healthy returns for those invested in stocks. Of course, some stocks performed better than others and picking the right stock requires a bit of work. To benefit from these impressive average returns, and to reduce the work required in choosing good companies, ETFs are at hand.

TIME IS YOUR FRIEND - INVEST EARLY AND REAP THE BENEFITS

For those with plenty of time until retirement, starting early will produce the highest returns requiring the least amount of work.

If you invested 5,000 Euro per year at an average return of 5 % (that is below the average stock market return and some companies achieve this figure in dividend payments alone) at the age of 25, your retired self at 65 would enjoy a comfy 635,199 €. If you had invested the same amount only ten years later at the age of 35, your 65-year-old self would "merely" enjoy a nest egg of 353,803 €. The extra 285,396 € are, of course, partly due to the additional 50,000 € invested. The majority of these extra few hundred thousand Euro, however, are the compound interest on your principal. 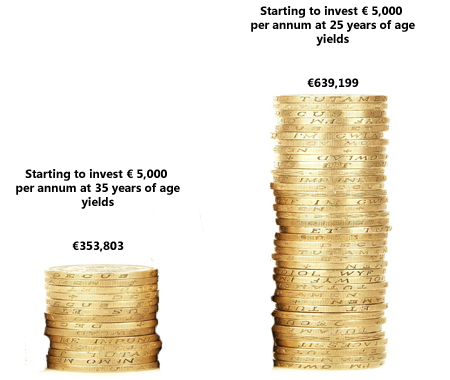 There is no doubt that over a forty-year period the market will see many ups and downs, swings that are caused by panic, cause panic, bear markets that feel like never-ending, bull markets that hoist you onto Cloud 9. Would you be better served to buy and sell instead of staying invested? If you had a crystal ball, then most definitely - buy and sell and repeat.

Without a crystal ball, staying invested in the overall stock market through vehicles such as ETFs, or even a well diversified stock portfolio, refraining from trying to time the market, resisting the urge to buy and sell, generally proves the better option. Take European stocks, for instance. Those who remained invested over a 17-year period would have enjoyed a return of 4 % per annum. As significant drops in the stock market, such as the one we saw earlier this year, are frequently followed by major upticks, investors who tried to time the market by selling and buying, missed out on those precious gains. In fact, with only 10 positive days missed, investors would have to book a 0.8 % loss per year. With 30 days, those who sold and bought lost 5.4 % per year, whilst the overly active investor who missed 50 of those days following a fall in the market would have lost 9.1 % per annum. 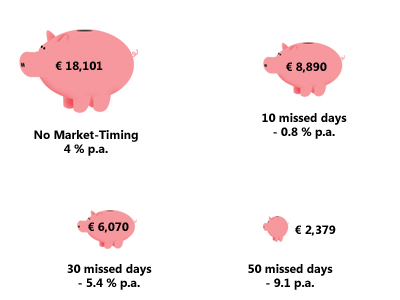 Or take the last twelve years. With interest in savings accounts being a thing of days gone past, it is of little surprise that stocks, commodities, and bonds far outperformed cash savings. Even despite the crises over the last decade and a bit, a well diversified portfolio returned a 4-time multiple. Cash savings, including those high-yield interest years only returned 1.7 % per year, whilst other asset classes such as stocks returned 6.6 % per year over the same period.

Staying invested over the long-term with a well-diversified portfolio or ETF, will yield the greatest financial rewards. Thus, even with many markets having already climbed to historic highs, we will see many more in the future. It might just take some time and patience. Indeed some markets have not fully recovered even amidst the strong market recovery elsewhere. One such example is the UK stock market that is still lagging its peers.

Whatever market you choose, stay invested, stay patience, and all the best of luck on your investment journey.

The secret to building wealth
Secret millionaires and savers
How to choose a good share?
10 Things to Consider When Buying Shares
Automate your wealth building