Have you ever wondered What is money? Money is such an influential and substantial part of our lives. Whether you want to buy food, pay rent, pay off your mortgage, go on holiday, go for drinks with friends, buy new clothes or latest smart phone, money is the key that will allow you to pay your dues and realize your dreams.

Money is so embedded in our lives that our daily activities are determined by the drive to make, spend, save and invest. It rules our lives. Unless you are very wealthy, it forces you out of bed every morning, has you track to work, and sees you working hard every day. Money has a massive influence on how we choose to live our lives. Thus, money is one of the main drivers in life – whether we capitalists, socialists, minimalists, consumerists. For some its influence is bigger than for others, but regardless, money controls our lives. By why exactly is that?

Money means nothing – Salt, butter, wine and cigarettes as currencies

Let me be a rather provocative by saying: Money has no value. Well, it has no real value, just an assumed value. Whatever we believe a particular coin or note to be worth will enable us to trade products and services. Money is an artificial construct. It is a means to exchange services and trade goods. It is merely an invention to make life’s transactions simpler. We could just as well use stones or salt.

Sounds ridiculous? Salt indeed was once a currency.  Not only this, salt serves as the etymological origin for the word salary (it was given to Roman soldiers in exchange for their services and hard work – just like a salary is given to employees today). Similar to money today, its production was closely monitored and limited to ensure its but with time we moved away from using salt to using coins and bank notes.

Moorish merchants in the 6th century had already started trading salt for gold and those in Abyssinia went a step further using slabs of rock salt (amoles – 30 cm in length and 6 cm thick) as coins, just as we’d hand over a coin in exchange for something we desire.

The money as we know it has no meaning, no intrinsic value. Take another example: World War II. One of the most precious items at the end of WW II was butter. The exact same diary product you put on your slice of bread without contemplating was once a valuable commodity. Not officially like salt, but ask anyone who grew up at the end of WW II in Europe about the value butter presented to them. The same accounted for cigarettes at the time. Those awful sticks that are now forbidden to be lit up in most public places were once used as an unofficial currency. My dad has often told me the tales of how he and his friends as little boys traded butter and cigarettes for other goods with American military personnel and German civilians. Butter and cigarettes were scarce and therefore became, although not officially, a type of currency: scarce resources.

Sometimes it is not that a commodity is scarce that leads to its use as a currency, but the scarceness of another commodity. A hospital in Alsace hosts a wine cellar that stores a barrel of wine dating back to 1472 and being considered the oldest wine in the world. With Alsace being a major wine region, many of the patients who sought treatment in the hospital were winemakers. Also their wines were of great quality, they were not affluent and only had few golden coins - often not enough to pay for their treatment. Many thus decided to pay for the medical treatment with wine. The hospital accepted and thus a unique hospital wine cellar was born.

So when I say money means nothing I am actually referring to its intrinsic value. The money today is only worth what we perceive it to be. With ever increasing amounts of money, it loses its value, what we generally consider inflation.

Money is an artificial creation

Just look at some of the most infamous events of recent history: Zimbabwe or the Weimarer Republic. Zimbabwe endured an annual inflation of a few hundred thousand percent peaking in May 2008 with an inflation rate of more than one million. Yes, this is no typo, one million percent of inflation rendering money worthless. Today the Zimbabwean dollar is no longer a currency used in 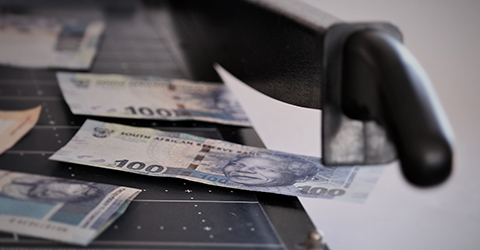 Zimbabwe. Instead a variety of foreign currencies are now used to conduct trade.

During the hyperinflation of the Weimar Republic, it wasn’t wallets that carried people’s money, it was wheelbarrows.  Caused by reparation payments stemming from the first World War, the German government upped printing money manifold to pay the allied forces and their own people who had previously lend money to the government in the form of so-called war bonds. This led to enormous amounts of money in the market holding no real value, as these were only printed notes, yet had no real value by being backed by material goods. With no real goods to maintain the balance, the increasing input of money into markets quickly led to inflation. As there weren’t enough products on the market, the money people had to pay for, for instance, a loaf of bread spiraled out of control. Within hours money that was earned became worthless. An egg, for instance, was available for 800 Reichsmark on June 9th, 1923. The same year on December 2nd, an egg cost 320 billion Reichsmark. Similarly, while a dollar was equivalent to 100,000 Reichsmark in June, the value of the dollar in December skyrocketed to 4.21 billion Reichsmark.

For this dangerous fiscal flaw, money is no more than an artificial creation that can be very beneficial and simplify life, but similarly be very disadvantageous if hyperinflation renders the number on banknotes and coins worthless.

So why do we bother with money? A very simple reason, it makes trading easier and functions as a benchmark to compare the value of a good or service to. Instead of carrying around slabs of salt, bars of gold, or permanently negotiate with your counterparts about what you can give or do in exchange for a service or product, you simply hand over your money. But if that money loses its perceived value, it transforms into what it is: paper and metal.

Recent years have seen the rise of digital and alternative currencies. Bitcoins are certainly the most famous digital currency. A drive towards these limited currencies is certainly a very desirable alternative to today’s existing monetary systems. These are not controlled by an untouchable institution but a group of people with the ability to limit the supply. While this has many advantages, it also has a number of disadvantages. But digital currencies undoubtedly offer fantastic alternatives to paper money.

On the other hand, groups of people have decided to return to a more elementary system of trading services and goods by creating their own alternative form of currency. In Greece, amidst the financial crisis that has left the country in shambles for too long, alterative forms of payment have sprung up, most notably TEM and Ovolos, that enables individuals and businesses to trade their services and products without using what we officially call money.

We all know Uber, AirBnB, BlaBlaCar, and the likes. All of these allow trading your skills, cars, or beds for official forms of money. But how about an alternative currency, just like Bitcoins, Ovolos, or Tem, that enables you to not spend a dime of your hard earned cash, but earn “money” in the form of credits. One such example is the network Community Exchange System, a network of individuals and business offering their services, accruing credits in the process, that subsequently can be traded against for other services and products.

It is more than probable that an increasing number of these alternative currencies, credits, or monies will pop up with time. But just as salt was once a valuable currency, money is only worth what we perceive it to be. With all these new sharing economies, digital and alternative currencies the value of money changes permanently.

This is undoubtedly a fantastic development. Your talents, skills, labor, and expertise are also currencies. In fact, currencies more durable than printed paper and punched out metal coins. Not only are personal skills the most valuable currency, so are properties, gold, and shares.

Looking at the recurring crises, particularly times of uncontrollable hyperinflation, printed money never fared well. Oftentimes it became worthless or lost much of its value. In stark contrast, properties, land, gold, and shares endured even the worst hyperinflations and protected their owners’ wealth. While those who saw their paper money lose all its value during the hyperinflation in Germany in the 1920s, property owners, shareholders – that is owners of businesses, and those in the possession of land and gold recovered relatively quickly and came out of these crises relatively unscathed.

So what is money? It’s no more and no less than what a society believes it is worth. It can lose its value overnight for all it is paper and a mix of different metals. Money has helped us to quicker trade products and services and abolished the need to barter, but it only has value as long as it’s somehow backed by a real, material good. Thus, next time you hold that $/€/£ 10, 20, or 100 in your hands, reflect what it really stands for.

The secret to building wealth
Cash versus Stocks - How to build wealth
Secret millionaires and savers
How to choose a good share?
10 Things to Consider When Buying Shares